You have heard the old saying: Two’s company, three’s a crowd.
I suppose that means when two people are getting along well with another, that if you add another person, there is a greater chance of conflict or awkwardness.

And there are times when that is very true. When two people commit themselves to a relationship, sometimes there is difficulty in a relationship somone else is interfering.
For instance, if one of the parents tries to influence things. A mother-in-law or a father-in-law can certainly raise anxiety and conflict if they are trying to intrude and assert themselves into a couple’s life.

And it was just on the news a week ago about the interview Princess Diana gave to Martin Bashir, and the new revelation that, Martin Bashir used deception to secure the interview and then lied to the BBC about what he did.
But, in that interview Diana said: There were three in the marriage, referring to Prince Charles’ relationship with Camilla Parker Bowes.

A fellow by the name of Murray Bowen who developed something called Family Systems Theory, used emotional triangles as the building block of his theory.
When Person A gets into conflict or anxiety with person B, then person A goes to person C to tell their story and get emotional support.
Sometimes as in the case of a Princess and a Prince, they get more than emotional support and develop an intimate relationship.

For him, this is universal human experience. Everybody. Everybody, when they have anxiety with somebody will go to somebody else for emotional support.

And it is not all bad. Going to a mature person for emotional support is often a very good thing. It is not that a triangle is bad in and of itself, but Here is the million dollar question: If you go to someone else for emotional support, will you actually deal with the person with whom you have the anxiety?

You want something from a parent. The parent says not, so you go to the other parent.

You go to your boss for a raise, because your spouse put you up to it.
You don’t like the minister’s theology so you tell someone else in the church whom you know shares your theological position and isn’t a fan of the minister’s position. Or maybe you go tell the minister, expecting that he or she will change.
You don’t like your teenage child’s rebellious behavior, so you go to a friend, or a counselor, or a minister wanting them to intervene and fix things.
You have a problem in your marriage and that attractive co-worker who smiles in your direction and wants to go for coffee, is probably somebody who really understands you…as opposed to your spouse, who doesn’t get you,…so you go for coffee and who knows where that will lead.
You don’t like the fact that your partner smokes and try to get your partner to change. In this case the third party in the triangle is the issue of smoking.
When Person B goes for support to Person C, it stabilizes the triangle temporarily but then Person A feels left out and seeks out emotional support from person D.
Person D and Person C each have their own emotional issues and have other people in their triangles.
The point is that something like a church congregation is in reality a network of triangles, triangles formed within the church, and triangles with people without the church. And all the people with whom you. Have triangles have their own triangles and so on. It is complex.
And often when there is conflict, it is not just conflict with the two people or sides, but with the other person or issue in the triangle, of whom you might not even be aware.

Now triangles can have positive effects if the other person in the triangle is mature.
If Bob and Susan are partners and there is tension and anxiety and conflict and Susan goes to a friend or a minister or a counselor for emotional support, and that third person in the triangle is mature and listens and then gives Susan emotional strength and maturity, and helps her to go back to Bob and sit down and talk it out, then that is a good thing.
If the third point in the triangle says that the other is a jerk, and just reinforces Susan’s idea that she is right and her partner is wrong, it could have very negative consequences for the relationship. Most of the time in a conflict it is not so cut and dried as to one person is the bad one and the other is the good one, even though that is how we like to frame it when we are hurt. The truth is that we are all sinners and are not perfect, and we contribute to the conflicts we are in, even when we are right. Sometime it is as simple as not listening, or not understanding, or not forgiving.

Another interesting effect in triangles is that when one person of the triangle tries to impact the relationship of the other two people often it is very counterproductive.

If Dad says to his daughter: your boyfriend’s a jerk, drop him, the inevitable reaction is that your daughter will go towards the boyfriend for emotional support and away from the parent who is causing her anxiety.

A number of years ago a lady in one of my churches, who even though she was about 28 years older than me, was one of my closest friends, told me about her own daughter when this daughter was about 19 years old.
Her 19-year-old fell in love with a Carney. The fellow worked in the Carnival industry going place to place with the show. He was significantly older by about a dozen years.
The daughter was in love. She wanted to get married. My friend, the mother had strong parental concern. She did not approve and wanted to stop this relationship but she wasn’t sure what to do. She went to her own mom and asked what to do, and her mother, the grandmother, told her in no uncertain terms not to oppose the relationship.
In fact, the grandmother told her to support the wedding and help her plan the wedding. Just make sure the wedding date is far in the future.
So, the mother went to her daughter and supported the relationship and the wedding and they made plans and talked about wedding dresses and receptions and bands and planned the wedding a couple of years down the road.
Within six months the daughter realized her boyfriend was a jerk, all on her own, and the wedding and the relationship was off.
Remember the movie, the Little Mermaid. King Triton says to her daughter not to have anything to do with those humans. And what does Ariel do. Fall in love with a human.

Triangles happen all the time in churches and often people want to drag the minister into the middle of whatever conflict there is. Support our side which is doing a good thing, over against the other side. It could be about music, staffing, finances, relationships, interpersonal conflicts.
I have had concerned people wanting me to fix their wayward teenage daughter, or emotionally distant husband, or mid-life crisis parent who is having a mid-life crisis well beyond mid-life.
I have had people wanting me to support the hiring or firing of staff. I have had people wanting to be to support or oppose the building project. I have people want me to intervene in a personal conflict in the church. I have people who are opposed to my theology, my style, my ministry or whatever.
I have had people butter me up, feed my ego and put me on a pedestal.
All are forms of triangling, and I have learned the hard way from many mistakes, that getting sucked into an emotional triangle can have negative consequences for pretty much everybody involved.

And I know you are wondering if I am actually preaching today and getting to some scripture, but I wanted to spend some time on triangling and how ubiquitous it is…
So that I could talk about another triangle, the Trinity.

The word Trinity is not actually in the bible, but it is implied in scriptures like this one:
The grace of the Lord Jesus Christ, and the love of God, and the fellowship of the Holy Spirit, be with you all.

The scriptures talk about God, the father, the son and the Holy Spirit. And in the fourth century that was turned into a creed. A creed that one had to believe in order to be a Christian.
But I think that is a misuse of the Trinity. The Trinity should be less a doctrine, one has to understand and believe and more a way of life to live.

Yes, you say, but it is easier for them because they are God.
And I believe that is a total copout. To say that just because something is hard or difficult, you cannot or don’t have to do the right thing, or the loving thing, is a total load of crap.
If people didn’t do things because they are hard or difficult, then women wouldn’t have babies, and people wouldn’t go to school or to work, or have relationships.

No, it is not always easy to love the other in a relationship, to want the best for them, to treat them always with respect, to be honest and talk it out. It is not always easy to love unconditionally, to listen carefully, to walk in their shoes, to forgive their sin, and to understand their weaknesses.
It is easier sometimes to want to hurt them, or see them punished, or give them the silent treatment, or swear at them, or talk behind their backs.
It is easier to run off to someone who doesn’t live with you, who doesn’t have to put up with you and your individual weird ways, who doesn’t know all your sins and your emotional baggage, and get from that friendly other hugs and emotional support when you are in crisis.

« You will receive power Binding the strong man » 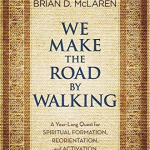 Our Bible Study resumes September 15th! Thanks to the coronavirus we will adopt a ZOOM remote meeting format, and we will continue with the “We make the Road by Walking” Bible study from last year. If … END_OF_DOCUMENT_TOKEN_TO_BE_REPLACED
View Calendar
Add